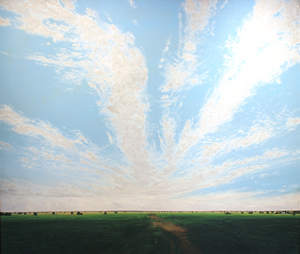 I’m a Midwesterner who has stayed put to make sense of where I live. My interest in the land is crystallized in my paintings about it.

By combining intimate reflections with a deep understanding and respect for nature, Keith Jacobshagen celebrates landscape in a manner reminiscent of the early Dutch masters. Through their trademark low horizons and wide, dominant skies, Jacobshagen’s paintings elicit a variety of emotions inspired by the Midwestern countryside.

At the site, Jacobshagen takes notes that include exact time and location as well as other intangibles such as wind levels and smells. In this manner, his small works are akin to diary entries or the comprehensive landscape descriptions of a Willa Cather novel. Though Jacobshagen moves into the studio as his paintings increase in size, each work maintains the same freshness of life as those painted in the field. The vantage point is placed above eye level in the majority of his work. This perspective, along with the artist’s careful arrangement of forms on the picture plane energizes the scene through what Art in America describes as “romantic self expression and a naturalist’s cooly objective vision.”

Raised in Wichita, Kansas, Jacobshagen graduated from the Kansas City Art Institute and received his Master of Fine Arts from the University of Kansas. His work has been received with high acclaim throughout the United States and was featured on CBS’s Sunday Morning with Charles Osgood.

Currently a professor at the University of Nebraska, the artist has received the Outstanding Research and Creativity Award given to professors who have made extraordinary contributions to their field. Jacobshagen’s work is featured on the cover of the Smithsonian Press/University of Iowa publication Plain Pictures: Images of the American Prairie.